Incisions are essential in order to approach, reach modify and correct the nasal structure in septorhinoplasty. The septorhinoplasty incisions have a special importance. The intercartilagenous incisions divide the attachment of lateral crus to the upper lateral cartilage and the transfixion incision divides the attachment of the medial crura to the caudal septum. This results in loss of tip support and its unpleasant effects of dropped tip, pollybeak, hanging columella and wider nostrils. Therefore, compensatory means in order to support the tip (new dome creation, or the modified vertical dome division with columellar and tip grafts) are essential manoeuvres following our rhinoplasty incisions.

The choices of incisions varies according to the clinical situation. We currently use the following incisions: 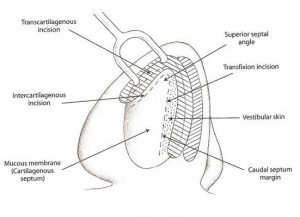 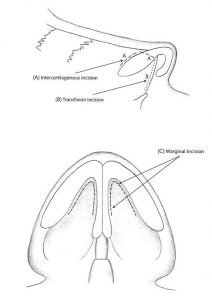