The Deviated Septum : When It Needs Treatment?

The Nasal septum is the thin central division on the nose that is composed of bones and cartilages. The function of the nasal septum is to create left and right airways inside the nose that we call nostrils. However, very few people have a perfectly centrally placed nasal septum. There is always a mild deviation that is too minor to be noticed. When the deviations become too prominent or tilt at an angle greater than 60%, medical interventions become necessary in terms of deviated septum surgery. In this regard, Dr. Bashar Bizrah holds the record of performing 38,000+ successful deviated septum rhinoplasty on multi-ethnic background patients worldwide.

How To Tell If you Have A Deviated Septum?

If the angular orientation of your septum is such that you have a different nostril size, it is obviously a sign of a deviated septum. While addressing such patients’ queries during their initial consultation, Dr. Bizrah runs a clinical evaluation of the interior and the external nasal structure. You will be asked to breathe lightly and deeply to understand your nasal cycle patterns. The process involves gently widening the nostrils to better view your bone structure and internal tissues using a speculum handheld machine. If required, endoscopies and CT scans are performed to view the internal nose structure from different angles and assess the extent of damage before proceeding further. However, you can rest assured of a completely hassle-free septum rhinoplasty procedure when you choose Dr. Bizrah as your doctor.

Symptoms Of A Deviated Nasal Septum

Obstruction of either nostril with noisy breathing during sleep is one of the earliest signs of a deviated septum. The deviation usually leads to a significantly narrow nasal airway on one side of the nose, making you use the other part from breathing. The condition worsens when the nostrils are blocked due to cold or allergies, leading to breathing problems, facial inflammation, noisy breathing, etc. Additionally, headaches and frequent sleep disturbances are some of the other symptoms of a deviated septum. To know more, you can search for Dr. Bizrah’s helpful explanatory videos about rhinoplasty on YouTube, where he describes the reasons behind its occurrence very clearly. You can also watch recorded videos of him performing deviated septum surgery on his patients to acknowledge his world-renowned skills. 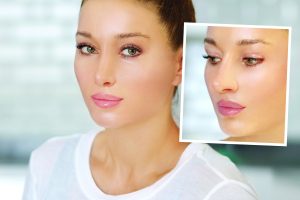 Management Of A Deviated Nose

Medications are usually the first line of treatment of the problems created by a deviated      septum. Decongestants, nasal sprays, and antihistamines are some medications used in      these cases. Decongestants can be used in oral or nasal form. While nasal decongestants      work better for decongestion purposes, their frequent use can lead to dependence and        should be avoided. Both oral and nasal decongestants contain steroidal components and    can cause blood pressure rise and heart issues in the long run. Apart from decongestion,    antihistamines and nasal sprays are some other medications used for allergic and     inflammatory conditions. But these can provide only symptomatic relief and are not  permanent.

When Does Surgical Correction Become Necessary?

Deviated nasal septum surgery becomes imperative when you have trouble breathing, sleeping, or performing any day-to-day activity. While trying to breathe through your mouth, you end up drying your oral mucosa and the moist linings inside your nose. This leads to frequent nosebleeds and further needs correction for resuming a normal life. Additionally, the nasal inflammation, in turn, inflames the sinuses resulting in persistent headaches, turning unresponsive to any medicine. This is when planning for deviated septum treatment becomes imperative. Dr. Bizrah makes sure his patients go through a painless septoplasty surgery.

Septoplasty is preferred for nasal septum deviation that is extremely prominent and a source of cosmetic and symptomatic problems for the patient. A deviated septum needing surgical correction can be either congenital, i.e., present at the time of birth or acquired later in life. However, septum deviation causes are hard to ascertain without analyzing patient history. Factors like trauma, accident, or injury are usually responsible for an acquired septum. In these conditions, nasal deviation may be performed as a single surgery or in combination with other nasal procedures depending on the severity of damage caused to the nose.

Can Anyone Opt For Septoplasty?

You can opt for Septoplasty if your septum deviation is not responding to any ongoing medication. Apart from the deviated septum, you should not have any systemic conditions that cause poor wound healing after the surgery. It is also important that you are not on any blood-thinning medications that can increase the risk of excessive bleeding during the surgery. Most importantly, you need to understand that Septoplasty is not a nose job that can modify the shape of your nose but a reconstructive procedure for a deviated septum.

What Happens During Septoplasty?

Before the procedure, you are kept under local anesthesia, and measurements are taken for the amount of correction on the septum. During the Septoplasty procedure, the surgeon makes incisions on the inside of the nose. This is followed by trimming, repositioning, and, if required regrafting the cartilage responsible for the deviation into its normal position. If the deviation is because of a distortion in the shape of nasal bones pushing the septum, they are restructured and repositioned. After working on the deviation, the surgeon closes the incisions with sutures. The sutures being absorbable and placed inside the nose make it a minimally scarless procedure. Dr. Bizrah performs scarless rhinoplasty procedures, which take less than an hour under general anesthesia. After the procedure is complete, you are kept under observation until your parameters are stable and your anesthetic effects are worn off.

The Septoplasty cost depends on several factors such as the severity of deviated septum, pre-surgery tests, accompanying nose procedures, skills of your surgeon, etc. A mere deviated septum that’s creating cosmetic and breathing problems may comparatively cost less. But an accident or trauma-induced deviated septum followed by bone damage or congenitally deviated septum with cleft palate needs further correction apart from Septoplasty. This increases the cost of the surgery. Additionally, the fees and skills of your surgeon, the modalities to be used during the procedure, including medications, add up to the final cost.

However, you can rest assured of having the best rhinoplasty surgery at Dr. Bizrah’s clinic at a reasonable fee in line with current market standards and the quality of service provided.

What If A Deviated Septum Is Left Untreated?

If left untreated, a deviated septum can lead to chronic sinusitis due to the frequency of sinus inflammation. Chronic sinusitis can result in severe damage to its surrounding structures like the facial muscles with the orbital region and through it the brain. Apart from this, a deviated septum due to irregular airflow can also progress into sleep apnea. Sleep apnea is characterized by moments of no breathing during sleep. This can hamper your sleep cycles and affect your performance in work and other day-to-day activities. Sleep apnea can result in high blood pressure, diabetes, depression, and increased risk of heart attack and stroke when left untreated.

It’s better to act before it gets too late. Book for a face-to-face or Online consultation, depending on your availability with the renowned Facial plastic surgeon Dr. Bizrah at our centers in Dubai or London, to ascertain your eligibility for the procedure. Let recovering from Septoplasty be a cakewalk for you under the bespoke Treatment of Dr. Bizrah.